Penfolds RWT: Nectar of the Gods

Dionysius is the Greek god of wine, of possession and ecstasy, pursued by wild female followers in ecstatic trances.  He was the protector of those who do not belong to conventional society and symbolizes everything which is chaotic, dangerous and unexpected, everything which escapes human reason.

He is also attributed with the origin of theatre as we know it.

Thus it’s easy to see how his festivals and followers could lead to the development of  western theatre. Theatre requires its actors to commit utterly and totally to what is often a dangerous and unexpected art.

As this quirky writer is quite familiar with the art form, it’s not too great a leap to observe that the rituals of wine tasting and appreciation are clearly highly theatrical and very definitely require the rigour of a seasoned actor. On this particular musical weekend, however, the performance was all music, and rock and roll to boot.

We didn’t quite emulate the wild women (and man) of Dionysian possession, as we gathered on a beautiful Indian summer day at Lindemans in the Hunter Valley for a private wine tasting.

The band was under the capable direction of the lead guitarist, the debonair Doc M.

With the other doc, DD, keeping rhythm on drums, the senior rock chick on laid back bass, and this writer on lead vocals (never short of a word or a hundred), we gave it our all, tasting our way through some outstanding Treasury wines.

Possessed we were, but not in any drunken ecstatic trance. The euphoric mood just kept on getting better, as we worked our way from semillons to chardonnays to pinot noir to arrive at the precious shiraz.

The standout white was Lindeman’s Reserve Semillon 2011. We liked the Pinots –  Etude 2008 from the Napa Valley and Squealing Pig 2011 from Central Otago.

Stag’s Leap Cabernet Sauvignon 2009 also from the Napa Valley did not immediately seduce but got there in the end, at least for me.

Doc M was becoming more and excited as the Holy Grail (on this particular occasion) was within his grasp. Seppelts St Peters Grampians Shiraz 2008, Saltram The Journal Shiraz 2006 and then finally the wonderful Penfolds RWT 2009 Shiraz.

Savouring this latter wine, it produced a hazy and laid back ecstasy in the fab four. Doc M was definitely floating under the gentle influence of this rich and velvety wine and kind of swept us all up in his rapture.

Nectar of the gods! 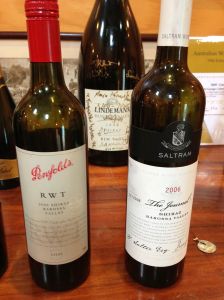