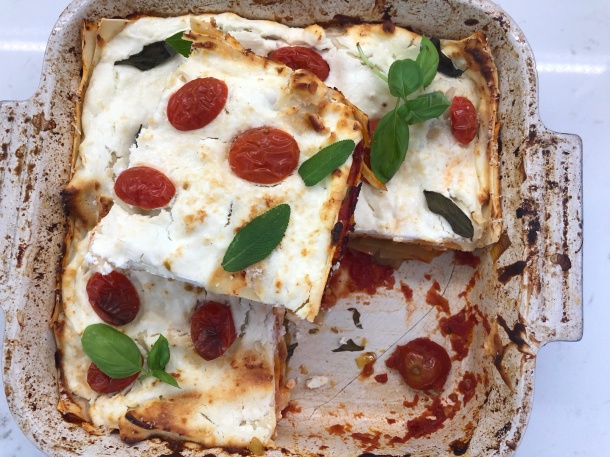 It’s almost spring in Sydney and the warm weather is here. A sure sign is the jasmine in bloom – sprawling over fences and permeating the air with its heady fragrance.

I thought it was time to revisit a recipe for lasagne I made a while back. It’s made with goat’s cheese, leek and tomato, no meat, so it’s a lighter option, perfect for the spring here, and for the end of summer for those in the Northern Hemisphere.

It’s pretty simple. With no white sauce, it’s easy to make. The goat’s cheese is a perfect substitute. You could change it up with the addition of different veggies – spinach, zucchini, eggplant or pumpkin would be good.

For the tomato sauce, heat 1 tablespoon of the oil in a medium frying pan. Peel and finely slice the garlic and fry gently until softened. Add the tinned tomatoes and using the tin as a measure, add a tinful of water. Add a good grind of rock salt and black pepper and the teaspoon of sugar. Cook on a medium heat until the sauce is thick and reduced, about 20 minutes, breaking up the tomatoes with a spoon occasionally as you stir the sauce.

Wash the leek/s carefully to remove any dirt or grit. Finely chop the leeks. Put another frying pan on medium heat – or you can save washing up like me and use the tomato pan after they have finished cooking! Add the other tablespoon of oil, and when the oil is hot, add the chopped leeks. Stir for a minute or two, moving the leeks around to make sure they are all starting to cook down. Turn the heat to low, cover the pan and cook for about 10 minutes until the leeks are softened.

Preheat the oven to 180 degrees C.

Break the goat’s cheese up, you still wants sine chunks so no need to blend or process. Add the milk to loosen the mix, and then add the Greek yoghurt. You are looking for a thick bit spreadable consistency. Season with a grind or two of rock salt and black pepper.

Now for the layering. Spoon 1/3 of the tomato sauce on the bottom of your baking dish. Add 1/3 of the leeks.Now put a layer of lasagne sheets on top. The size of your baking dish will determine how many sheets or partial sheets you need. I used one and a half per layer. Spoon ¼ of the goat’s cheese mixture over the lasagne sheets. Now start again and layer 1/3 tomato, 1/3 leeks, lasagne sheets and ¼ goat’s cheese. Finish with the rest of the tomato, the leeks and a lasagne layer.
Spread the remaining ½ goat’s cheese mixture thickly over the top of the lasagne. Grate as much Parmesan as you fancy over the top, and scatter some cherry tomorrow halves and sage leaves.

Place in the bottom of the preheated oven and cook for about 25 minutes until the top is golden and bubbling. Remove from the oven and scatter over a few fresh basil leaves before serving.

NB You could freeze the lasagne before baking, or after cooking, freeze whole or divided into meal size portions.

I’m making lots of pies this winter, as well as sampling the pies of a couple of of really good bakeries. My local Bourke Street Bakery makes some beautiful beef pies, packed full of beef and encased in excellent pastry. Very yummy if you’re in a hurry and can’t rustle up your own.

I posted this pot pie recipe last year. It’s such a simple one to make as the filling takes no time. I made it recently, this time making ham and leek pasties instead of pies.

So here is the recipe from last year.

”I had some chunky ham pieces and a leek in the fridge so decided that they would be the basis for some simple pies. I also had a lovely washed rind cheese, soft and melting, that I thought would go beautifully with the ham and leek. I’m a huge fan of nuts, so it was a no-brainer that I decided to put some walnuts in the pies as well. They added a lovely crunch and texture to the pies  All these ingredients were stirred into a white sauce, piled into the bowls, topped with puffpastry and baked in the oven.

I recommend using a good bought butter puff pastry for the recipe.

The recipe makes two substantial deep bowl pies. You could double the quantities for a larger pie in a conventional pie dish.”

Cut the leek into small slices. Melt the butter in a frying pan and add the leek with a good pinch or two of salt. Cook on a low temperature until the leek slices are soft, about 10-15 minutes.

Chop the ham into bite sized pieces and roughly slice the cheese. Chop any whole walnuts into smaller pieces.

Preheat the oven to 190 degrees C.

For the white sauce, melt the butter in a medium, heavy bottomed saucepan. Add the flour and stir for 1-2 minutes, to make sure the raw flour taste is cooked out.

It’s important to do this and the subsequent stirring in of the milk with a wooden spoon.

Stir the ham, leek, cheese and walnuts into the white sauce in the saucepan. Pile the mixture into the individual bowls.

Cut out circles of puff pastry that are larger than the diameter of the bowls and will be enough to completely cover the tops. Brush the tops of pies with the beaten egg.

Place in the preheated oven and cook for about 20 minutes until the top of the pies are golden brown and puffed up.

A visit to the wonderful Orange Grove Markets in Lilyfield this morning and the tempting produce available made me want to make soup. I was quite taken with the wild garlic featured on one particular stall, so I created a soup in which it could feature. 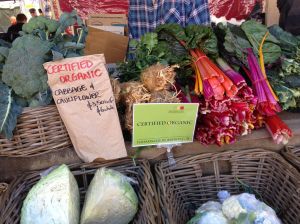 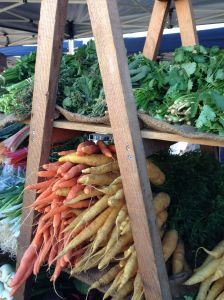 Pumpkin and leek go well together, and the garlic gave the soup a mild yet slightly pungent flavour. A definite improvement on traditional garlic or onion!

This soup allows you to be flexible with quantities – be creative!

A knob of butter

Generous grind of rock salt or to taste

Add the pumpkin chopped in large chunks to the saucepan. Pour in the chicken stock, and season with black pepper. Increase the heat and bring to the boil. Turn heat back to medium, cover with a lid and cook until vegetables are tender, about 20 – 30 minutes.

Remove from heat, leave to cool for about 10 minutes, then blend with stick blender in the saucepan until the desired consistency. I usually like my soup a little chunky, but on this occasion I opted for a smoother consistency.

Serve with a dollop of sour cream and fresh thyme leaves. 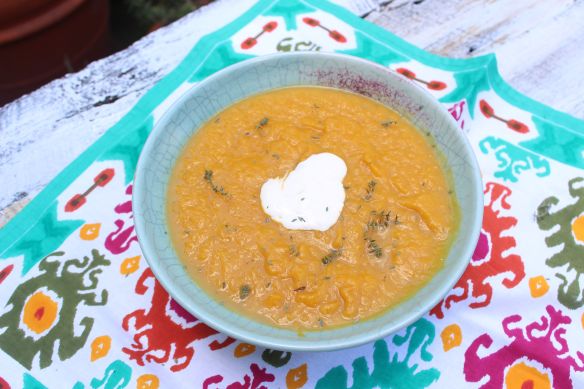 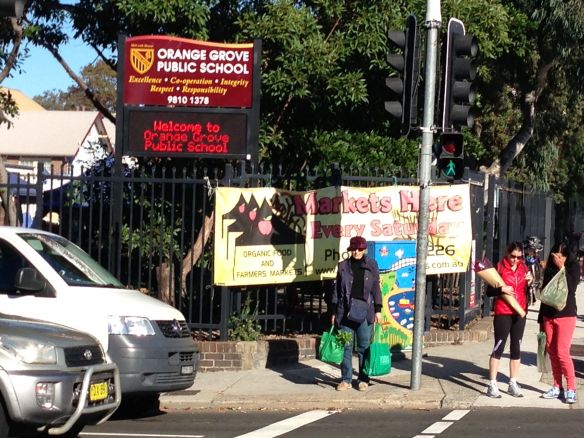