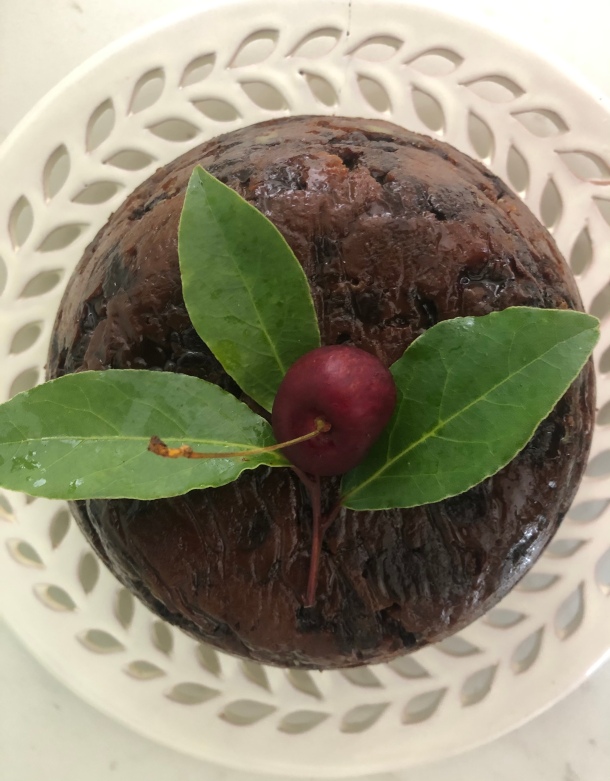 Now I know posting a recipe for Christmas pudding on the day after Christmas is a bit.. well.. late! I made this pudding a few weeks ago and just got too busy with Christmas preparations and baking to post. But I wanted to show this excellent pudding so I am posting while we are still in that Christmas food and festivities zone.

And I’ll blog again next year in time to make the pudding for the big day!

Earlier in December I was lucky enough to attend an online event hosted by the wonderful Sydney Living Museums.

This organisation looks after significant buildings integral to Sydney’s colonial history. Visiting historic houses and public buildings is always a fascinating trip into Sydney’s past.

I loved watching as Jacqui made the Christmas  pudding and really appreciated her step by step tips and tricks to making the pudding. She has a wealth of knowledge and importantly a really practical common sense approach to cooking.

I had to make the pudding! I made it the next day, and in order to be able to try it before Christmas Day, I made a baby one which I could eat on the same day.

What is amazing about this pudding is that it has no flour and no sugar! Bread replaces flour and the sweetness comes from the dried fruit. I have to admit I was a little dubious about the absence of flour and sugar, but I must say the resulting pudding was sensational! Deep, rich flavours with a strong caramel taste.

We ate the delicious pudding on Christmas Day. I served it with brandy butter, custard and cream – I think it deserved all three accompaniments.

Here is the recipe as presented by Jacqui Newling with her notations and this is the link to the original.

‘On Christmas-day a sprig of holly is usually placed in the middle of the pudding, and about a wine-glassful of brandy poured round it, which, at the moment of serving, is lighted, and the pudding thus brought to table encircled in flame.’

250g freshly made white breadcrumbs (made from a day-old 375g loaf, crusts removed)

1. If the fruit looks a bit dry, soak it with the spices in the tea or sherry overnight or for at least a few hours.
2. Grate the butter into the breadcrumbs in a large mixing bowl and mix through with a knife.
3. Add the soaked fruit and spices.
4. Add the beaten eggs and brandy, and encourage everyone in the family to stir the mixture (an old tradition).
5. Grease the pudding bowl with butter and spoon in the mixture, just short of the rim, as the mixture may swell during cooking.
6. Cover the pudding surface with baking paper cut to size, then cover the bowl with two pieces of foil pleated together in the centre – the foil should reach halfway down the bowl – and tie securely with string. The pleat is to allow for any expansion during cooking.
7. Place the pudding bowl on a trivet in a deep saucepan and add enough boiling water to reach halfway up the sides to create a water bath.
8. Cover and simmer for several hours, topping up with boiling water as needed (19th-century recipes invariably state
6 hours simmering to ensure a rich colour).
9. Cool to room temperature then refrigerate until required.
Serve with Mrs Beeton’s Plum pudding sauce. You can find the recipe for the sauce here.

I love picking up local cookery books from places I’ve visited, the more esoteric the better. Visiting Shetland, I was keen to explore the food of the islands and to collect some recipes. I loved my exploration through eating! I had some wonderful food, particularly some excellent baking.

In Shetland I bought a facsimile edition of Cookery for Northern Wives by Margaret B Stout, a book published in 1925, “containing practical recipes for old-time and modern dishes, all suited to the Highlands and Islands of Scotland.” Margaret Stout was a Shetlander who wanted to encourage young northern wives to cook simple dishes and also to record traditional Shetland recipes.

This is a recipe for Yeast Buns. They are basically fruit buns. I decided to give the recipe a go! The result was a rather soft style bun, almost like brioche. I expected it to be a bit like a hot cross bun, but it was much softer, more cake like, than a hot cross bun.

I cut down on the flour in the main mixture, as my baking sensibility suggested that 560g was a bit too much. I added more dried fruit than in the original, and substituted some candied clementine for the candied peel, as that is what I had on hand.

I converted the imperial measurements to metric, rounding up or down as necessary.

The bottom photos are of the original recipe from Margaret Stout’s book.

Sugar and milk to glaze

Here is the method, adapted from the rather scant instructions given by a Margaret Stout.

For the sponge, sieve the flour into a large bowl, then add the yeast and sugar and mix in the sourdough starter if using. Gradually add the lukewarm milk, stirring to make a smooth batter. Cover the bowl with plastic wrap or a tea towel, or my favourite, a disposable plastic shower cap. Leave to rise in a warm place for an hour.

Prepare the rest of the mixture. Rub the butter into the flour. Add the sultanas, raisins, caster sugar and candied peel or clementine to the butter flour mixture. Beat this mixture into the sponge, once it has risen, and mix in the beaten eggs. Mix well, for about 5 minutes.

Cover the mixture in the bowl with plastic wrap/tea towel/plastic shower cap and leave to rise again for 1 ½ hours.

Form the dough into small balls, place on a baking tray lined with baking paper. Cover the tray loosely with a tea towel and prove for 10 to 15 minutes in a warm place.

Bake in the preheated oven for 15 to 20 minutes, until the buns are a deep brown colour.

These buns are delicious eaten as is while warm! You can also eat with lots of butter and jam.

If you think the buns need zhushing, you could drizzle a little icing over the tops, made by mixing icing sugar with enough orange juice to produce a soft icing. I used blood orange juice as they are in season now in Sydney.

These buns keep well as they are enriched with milk, butter and eggs. They are really soft, and they remain soft even after a few days.

I’m so pleased I made them! It wasn’t difficult to adapt the recipe. The results were delicious.