Weight Watchers is a fabulous organisation with a no fuss, straightforward approach to weight loss. They provide a wealth of great recipes online that can be created easily and quickly. Many of their recipes are “0 points”, meaning that they tick the box as having ingredients which don’t count towards the points total in the WW food plan.

This recipe is so named as the basic pancake has only two ingredients, banana and eggs. To serve, I added fresh fruit and no-fat yoghurt, which are also 0 points. For a little bit of pizazz, I did serve my pancakes with a drizzle – or maybe a slurp – of maple syrup!

Combine the banana,  egg whites and whole egg in a food processor and process until smooth.

Heat a nonstick frying pan over a medium heat. You don’t need cooking oil spray, but  spraying a little in the pan won’t hurt if you’re worried about the pancakes sticking. Drop a tablespoonful of the batter into the frying pan. Cook for 20 seconds on one side or until golden brown, then flip the pancake and cook for a further 20 seconds. You need to be careful cooking the pancakes as they brown very quickly. Repeat with the rest of the batter – you will probably get at least 4 medium pancakes.

Serve the pancakes topped with the no-fat yogurt, a pile of pineapple chunks*, fresh raspberries and a little maple syrup if you dare!

* A great idea to make the pineapple super sweet, is to dry fry the chunks in a frying pan over medium to high heat, for a minute or two – cooking carmelises the sugar – they taste fantastic! 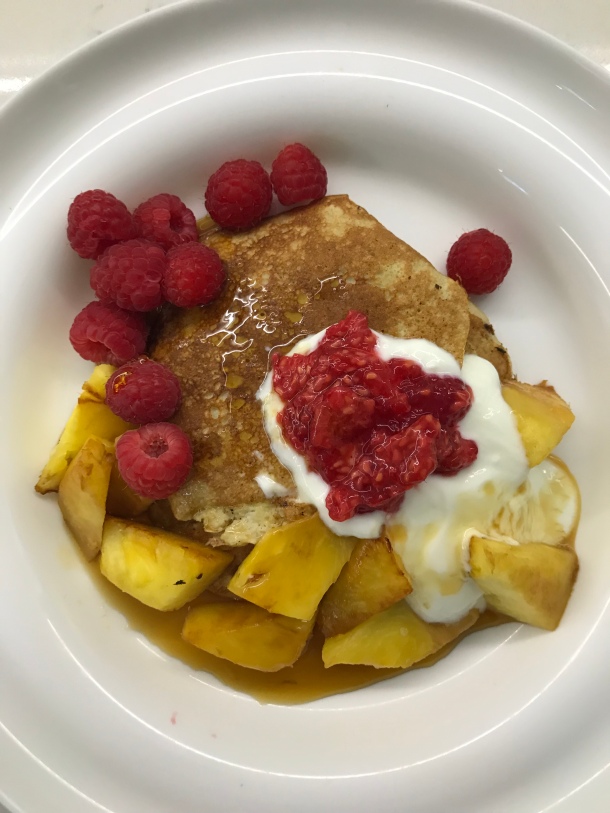 I have had a number of ice cream makers over the years, and currently have a Sunbeam Gelateria  ice cream maker which I thought would be used heaps as one can make ice cream from scratch in half an hour.

However the machine languishes on my bench top and I use it so infrequently that I have had to get the instruction book out each time I want to use the machine!

There are a number of no churn ice cream recipes that are really good. Here is the link to Annabel’s recipe: http://www.annabel-langbein.com/recipes/pistachio–berry-ice-cream/288

I made a passionfruit version served with fresh passionfruit.  I made a third of the quantity (pictured) which was just enough for two…or one greedy ice cream eater…

The following recipe is the full size quantity as this is probably what you would make for family or friends. 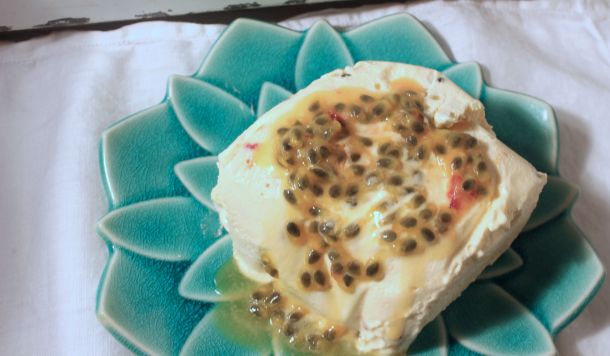 Method
Line a large 2.5 litre container or 6 molds or ramekins with baking paper.

To make the ice cream base, begin by separating the eggs. Place the egg whites in one bowl and the egg yolks in another, ensuring no yolk gets mixed in with the whites.

Once you have separated all three egg whites, add 5 tbsp of the caster sugar and beat the mixture until it forms stiff peaks. This will take about 6-7 minutes.

Now take the bowl containing the three egg yolks and add the remaining 5 tbsp of caster sugar and the 2 tbsp boiling water. Without washing the beater, beat until the egg yolks are pale, thick and ribbony. You will know they are ready when they hold a figure of eight.

In the third bowl, beat the cream to soft peaks.

Gently add the egg yolk mixture and cream a to the beaten egg whites. Fold together using a large flat spoon, then add the passionfruit pulp. Pour the mixture into the prepared container or molds or ramekins.

Freeze for at least 4 hours, or preferably overnight, until set. To serve, lift the ice cream out of its container/s, cut into slices and serve with more passionfruit pulp. 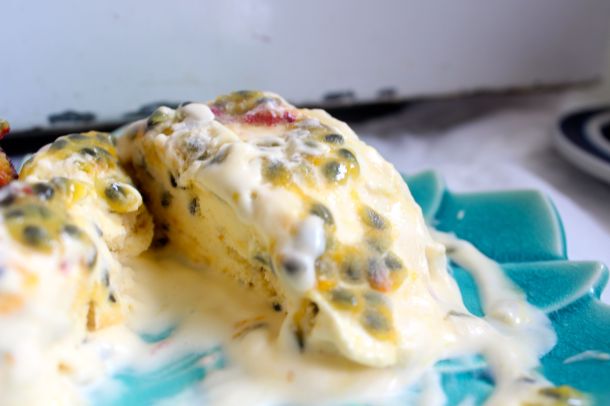