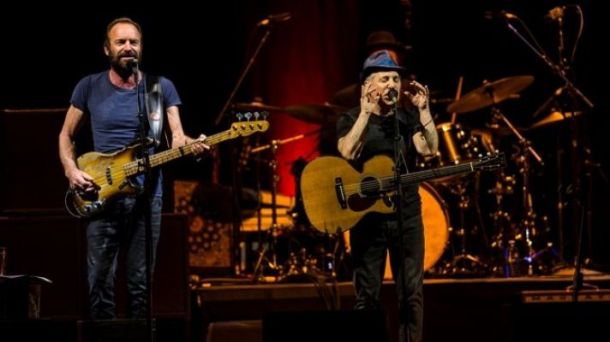 I’d like to share some of my music here. Music is a big part of life. I’m surrounded by music for much of the day. Radio, iPhone, car, computer and occasionally sound system.

There is nothing like a live music gig or music festival. I have been to so many great – and a few not quite so great – concerts of Old Rockers on their perennial world tours. Pictured above are the inimitable Paul Simon and Sting in the Hunter Valley in 2015.

As somewhat of an insomniac, I appreciate music that induces relaxation and preparation for sleep.  Contemporary ambient music has been described thus by artist Paul Gough:

“…the music ….. incorporates 20th century composition, blissful pop and ethereal drones. It is music to reflect and relax to – a soundscape in which to lose yourself.”

Charles Vaughan, Orla Wren, Epic 45, much of Pink Floyd, are some examples.

Daylighting listening moves widely from the 60s to the present, with a particular leaning towards British progressive rock of the 60s and 70s – see Old Music Still Contemporary Sound:

The sense of order intrinsic to Baroque music is calming; the improvisational genius of jazz is very cool and awe inspiring.  Bach for the former; a few favourites for the latter are Pat Metheny, Jaco Pastorius, Keith Jarrett, Charles Mingus and of course Miles Davis.

And a little of what I think about Steely Dan, whose music has been such a perennial influence, is in my concert review:

And I love our wonderful national broadcaster, the ABC, for the continuous and ever changing musical offerings on RN, Classic FM and ABC Local Radio.

More music reviews in posts, with more to come.