About the Quirk and the Cool

The Quirk and the Cool is me – Inga Scarlett from Sydney Australia. I’m a cook, who reads about food, talks about food, watches food programs, and I do a lot of cooking and eating as well! I’m fascinated with the art and science of food, and curious about food history and traditions.

The Quirk and the Cool is a blog primarily about food: cooking, eating, reading, conversation.  A forum  where I can share dishes, recipes, techniques, trends. It’s also a ragbag of other interests and views, a place to record the eclectic and eccentric, but much more likely the homely and the mundane. This random information is being documented more for the records of this quirky writer, but also for people who have a passion for food, who seek recipes and cooking advice or for those who may have similar pursuits.

The name The Quirk and the Cool references “the quick and the dead” (the Apostles’ Creed) and the “the Quirk and the Dead ” (Overnights ABC local radio). It’s an excellent segment if you’re ever listing to the radio in the wee small hours.

While clearly this is a food blog, I like to include posts about some of my other interests – music and performance, travel and the rather eccentric fascination with ruin and decay.

Family cooking, recipes and traditions handed down from generation to generation are important. I still cook from handwritten cookbooks that were written by my maternal grandmother and my mother and I have recipes handed on by other family members too.

I love eating out – but I want the food to be good! There is so much great food in Sydney, but a lot of pretension out there too. Some of the best food comes from local restaurants and even pubs; as a Sydney sider I love cafe culture, and there is so much great coffee out there. Every suburb has its gems.

I live in Rozelle, an eclectic suburb in the inner west of Sydney. Ten minutes from the city, Sydney Harbour at the bottom of my street, it has quaint old sailors’ cottages and commercial premises as well as dazzling new architecture. Historically a working class suburb, you now see a whole range of residents: artists and actors, accountants and entrepreneurs. Many of us have lived here for yonks.

Rozelle and nearby suburbs Balmain, Balmain East and Birchgrove on the Balmain peninsula are famous for their pubs and the area may well contain the most pubs per capita in Australia –  at one time, the peninsula contained up to eighty pubs! And add to that a cafe or restaurant on every corner and you have a vibrant food and wine scene. And the Orange Grove Markets down Balmain Road are some of the best in Sydney for local farmers’ produce.

The Peninsula, as it’s called, is a lush garden suburb, with gardens flowing over front and back fences, creating a lovely “shared” streetscape. Bougainvillea, jasmine, briar rose and native violets proliferate and overflow from garden to garden and onto the nature strip.

And lastly, I’m a dreamer. An insomniac who spends many nocturnal hours, thinking, dreaming, listening and sometimes the edges get delightfully blurred. Ambient music is the soundtrack of those hours.

I should mention my cooking companion is the Quirky Cat, Possum, so named for her stripey tail. A constant and knowledgeable critic of food, so long as it’s Hills Science Diet…

Below, the Sydney skyline at dawn, from the bottom of my street, and Possum, the Quirky Cat. 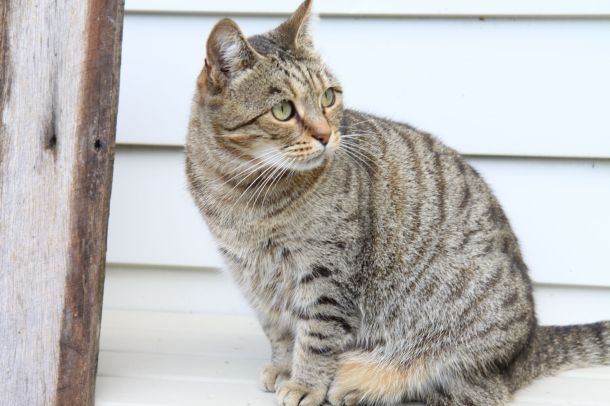