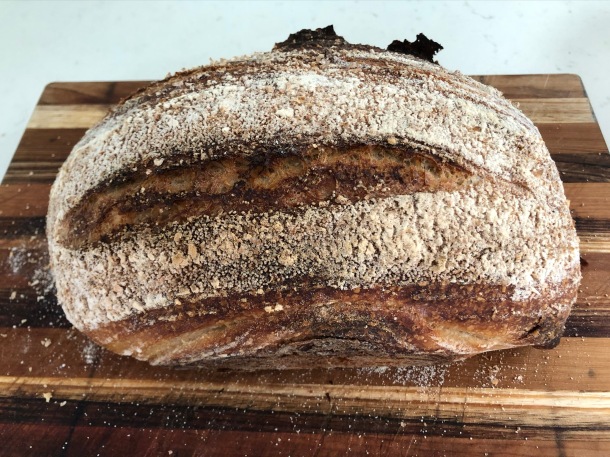 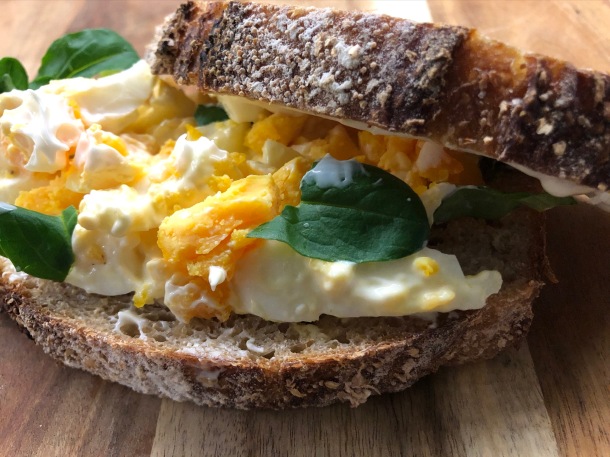 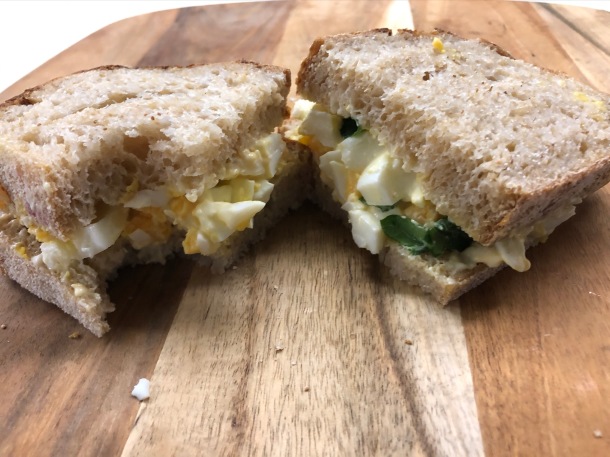 My current favourite is a wholemeal loaf that is great for sandwiches. It can be shaped as a batard in a proving basket and then baked in a pot, or equally baked in a loaf tin to make it easier to slice for the aforementioned sandwiches!

The recipe is based on my go-to sourdough method, with some tweaks for wholemeal. I have given instructions for both the batard in a cast iron pot and the loaf tin versions.

Weighing, mixing, autolyse
Weigh both flours into a large bowl. Weigh the sourdough starter and add, followed by the water. Add the honey. Mix everything together very roughly, in order to incorporate the ingredients.

Cover the bowl and leave for 30 minutes to autolyse.  I use a clear plastic shower cap as a cover, as it fits nicely over most sized bowls. A plastic bag is fine too. The autolyse is an important step to activate fermentation.

After the autolyse add the salt to the mixture. Now you can choose to knead the mixture using a dough hook in an electric stand mixer, knead by hand or use the stretch and fold method, essentially a no knead way of developing gluten in the dough. I strongly advise using a dough hook in a stand mixer – I have a KitchenAid which I swear by. You can really develop the gluten in the dough, which makes the dough much easier to pre-shape and then shape. *

Kneading and proving
Using a mixer, mix the dough for 6 minutes on the lowest speed, then 4 minutes on the next speed up. The dough should be lovely and stretchy, and pass the windowpane test. If you pull and stretch a small section, it should be translucent. Cover the bowl again and leave the dough in a warm place to prove for about 4 hours. I usually do a couple stretch and folds too – one straight after mixing, and one half way through the prove.

After the first prove of 4 hours the dough should have increased in size by about 50%.

Pre-shaping
Carefully remove the dough from the bowl with the help of a dough scraper onto an unfloured work surface. Definitely no flour needed! I use an oversized wooden board, but a bench top will work too. The dough will be stretchy, and shouldn’t be too delicate, but don’t be too rough! Slide the scraper underneath the dough, lifting it from underneath. You will feel the scraper catch the dough as it lifts it up. I try not to remove the scraper, just move it round all of the dough in a circle. Sometimes the scraper sticks, and you need to pull it out, remove the sticky dough, and then go under again, but the more you move around the dough, the tighter the dough becomes and the less likely to stick. Do this circular movement with the scraper a few times until the dough forms a round, wobbly ball that roughly holds its shape. Leave for 20-30 minutes to let the gluten relax.

Shaping
This is where you can shape for a batard in a proving basket to be baked in a pot or for a loaf tin. It’s important that you are super careful with the shaping as you don’t want to damage the dough you have worked so hard to develop.

If using a loaf tin, butter a large loaf tin generously. Move the dough and place seam side down, into the tin.

Second proving
While you can prove your dough for 2-3 hours at room temperature, I advocate the retarded or fridge prove, and this method serves me well. Leave the dough at room temperature for an hour then place in the fridge for 8-12 hours. Doing this at night works well as it allows you to bake your bread first thing the next morning.

Baking
For the pot method, pre-heat your oven to really hot – 250 degrees C. Put the pot in when you begin to pre-heat, and leave for 20-30 minutes.

Turn your dough out of the proving basket onto a thin flat baking tray or peel, well dusted with semolina. The pretty side of the dough is now on top. Open the oven and carefully take the lid of the pre-heated pot off. You can then slide the shaped dough into the hot pot.

At this point you can score the dough using a lame or razor blade. For a batard, score with 1 or 2 long cuts down the length of the dough. Put the lid back on the pot. Turn the oven to 220 degrees C or 200 degrees C fan-forced. Bake for 30 minutes, then remove the lid and bake for a further 20-30 minutes with the lid off. I have experimented endlessly with this latter baking time, and have come to the conclusion that the longer baking time gives a richer, browner loaf, which is what I prefer.

If baking in a loaf tin, pre-heat your oven to 250 degrees C 30 minutes prior to baking. If you have one, use a baking or pizza stone. Place this in the oven at the time of pre-heating. Once the 30 minutes is up, to add steam to the oven, put a cast iron pan or a baking dish with water in it in the bottom of the oven. Put the loaf tin in the oven onto the heated stone.

For either the batard or the loaf, once cooked, remove from the oven, take out of the pot/tin and leave to cool for an hour.

This bread, as the title of the post suggests, makes great sandwiches! It’s easy to slice into manageable sandwich slices. Great with lots of  kinds of fillings but I’m partial to egg and mayonnaise. I can strongly recommend that combination!

Of course like any good sourdough, lovely with plenty of butter and home made jam! 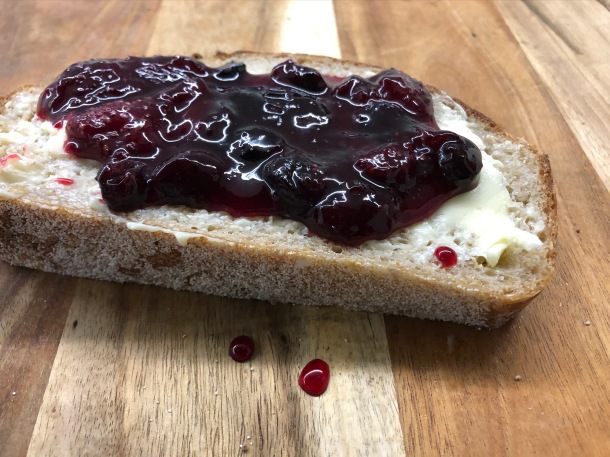 *If you don’t have an electric mixer, I recommend the stretch and fold method – see previous post on Sourdough, Ultimate Bread here for how to do this. As for traditional kneading, there is plenty of information on the internet to guide you.