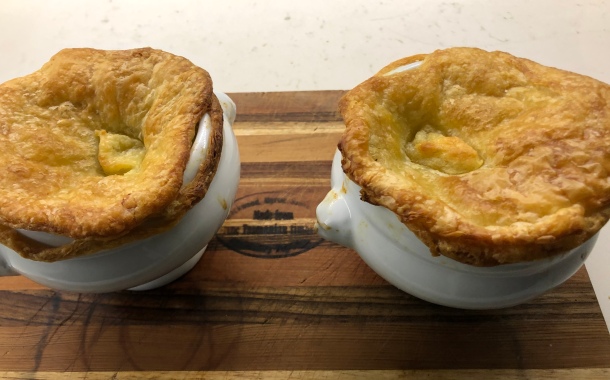 I’m making lots of pies this winter, as well as sampling the pies of a couple of of really good bakeries. My local Bourke Street Bakery makes some beautiful beef pies, packed full of beef and encased in excellent pastry. Very yummy if you’re in a hurry and can’t rustle up your own.

I posted this pot pie recipe last year. It’s such a simple one to make as the filling takes no time. I made it recently, this time making ham and leek pasties instead of pies.

So here is the recipe from last year.

”I had some chunky ham pieces and a leek in the fridge so decided that they would be the basis for some simple pies. I also had a lovely washed rind cheese, soft and melting, that I thought would go beautifully with the ham and leek. I’m a huge fan of nuts, so it was a no-brainer that I decided to put some walnuts in the pies as well. They added a lovely crunch and texture to the pies  All these ingredients were stirred into a white sauce, piled into the bowls, topped with puffpastry and baked in the oven.

I recommend using a good bought butter puff pastry for the recipe.

The recipe makes two substantial deep bowl pies. You could double the quantities for a larger pie in a conventional pie dish.”

Cut the leek into small slices. Melt the butter in a frying pan and add the leek with a good pinch or two of salt. Cook on a low temperature until the leek slices are soft, about 10-15 minutes.

Chop the ham into bite sized pieces and roughly slice the cheese. Chop any whole walnuts into smaller pieces.

Preheat the oven to 190 degrees C.

For the white sauce, melt the butter in a medium, heavy bottomed saucepan. Add the flour and stir for 1-2 minutes, to make sure the raw flour taste is cooked out.

It’s important to do this and the subsequent stirring in of the milk with a wooden spoon.

Stir the ham, leek, cheese and walnuts into the white sauce in the saucepan. Pile the mixture into the individual bowls.

Cut out circles of puff pastry that are larger than the diameter of the bowls and will be enough to completely cover the tops. Brush the tops of pies with the beaten egg. 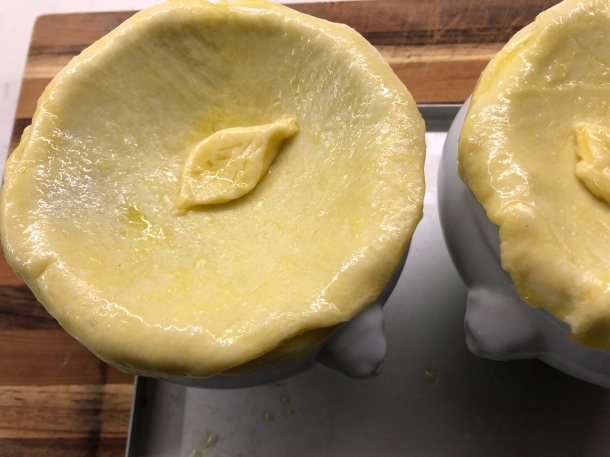 Place in the preheated oven and cook for about 20 minutes until the top of the pies are golden brown and puffed up.