A colleague at work has a wonderful grapefruit tree which she tells me is very bountiful, bearing lots and lots of fruit that is both tangy and quite sweet tasting. The taste is almost like that of ruby grapefruit.

Recently in receipt of some of the bounty, I made a couple of batches of marmalade. The first batch, I hesitate to say, I made without a recipe, throwing the ingredients together, measuring by eye! Luckily for me the batch turned out, the fruit yielding a couple of jars of beautiful marmalade.

The second batch I made I followed the recipe below, successfully making a few jars. I added some crystallised ginger slivers to one jar to add a little heat.

Wash the grapefruit, then remove the peel with a speed peeler. Cut the peel into thin strips and place in a large heavy bottomed saucepan. Cut the pith off the grapefruit, as this thick pith is bitter. Reserve the pith, putting it in a piece of muslin or muslin bag and tie up. Place the bag into the pan.

Chop the grapefruit into small chunks, and put into the saucepan, making sure you get as much of the juice as possible in the pan. If you can, try and remove the pips as you chop up the fruit.

Add the water to the saucepan and bring to the boil. Simmer until the fruit peel is tender – this could be between 45 minutes and an hour and a half. Depending on how long you boil the fruit for will dictate how much liquid you’re left with. Don’t worry if you have a lot of liquid – it will eventually set into a fantastic jelly as the grapefruit has a lot of pectin.

When the peel is tender, remove the muslin bag and squeeze the juice into the saucepan.

Add the sugar, stirring until dissolved. Boil rapidly until setting point is reached. To test for setting point, take the pan off the heat. Put a little marmalade into a cold saucer and put in the fridge or freezer for a few minutes. The surface of the marmalade should be set. If it’s not set, return the pan to the heat and test again after a few minutes.

Skim the froth from the marmalade. Leave for 10 minutes before pouring into sterilised jars.

You can add a few slivers of crystallised ginger to one of the jars if you like. 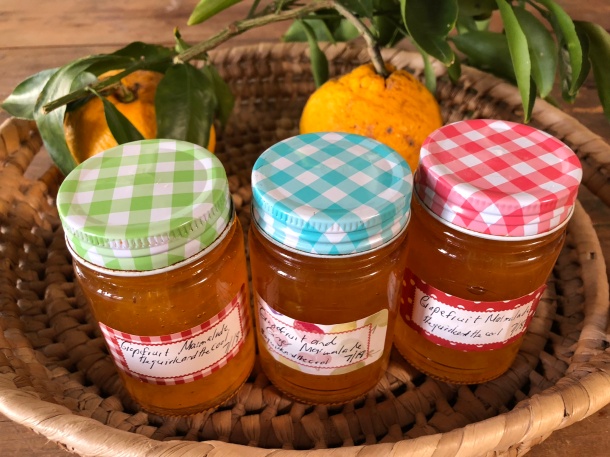