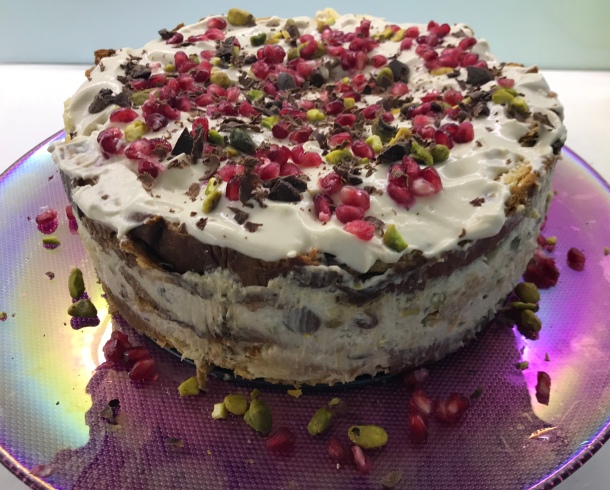 This is a fabulous cake I made as part of the recent Christmas and New Year festivities. It’s a relatively simple cake to make, as there’s no baking required rather an assembly of different luscious elements.

It’s a kind of “tiramisu meets trifle”! Layers of liqueur soaked panettone are interspersed with a mascarpone/ cream/egg/sugar/liqueur mixture with glacé fruit, chocolate and pistachios added.

I made a couple of alterations to the original recipe. I soaked the panettone in Cointreau as the specified Tuaca liqueur is hard to obtain.  As I was unable to source marrons glacés (candied chestnuts), I used glacé ginger instead.

The other recipe alteration was entirely accidental – the recipe asks for Marsala to flavour the mascarpone mixture. I inadvertently grabbed a bottle of coffee liqueur and used this instead. A happy accident as it turned out as the cake now had a real tiramisu flavour!

The link to Nigella’s recipe is here for the original version.

A couple of points. I think finely chopped chocolate is preferable to chocolate chips as these are a little too crunchy in the cake. The other thing to take note of, is not to overbeat the mixture when you add the mascarpone as mascarpone can easily curdle as I found out to my cost!

Here is the recipe as I made it.

Using a serrated knife, cut the panettone roughly into 1cm slices, then use about a third of these to line the bottom of a 22cm springform cake tin. Tear off pieces to fit so that there are no gaps.

Drizzle 2 tablespoons of  the orange liqueur over the panettone.

Whisk the eggs and sugar until very frothy and increased in volume and lightness.

Remove 250ml or a cup of the mixture to a bowl, cover and put in the fridge, for the top layer of the cake.

Chop the glacé ginger into small pieces and then add to the rest of the mascarpone cream mixture.  Then add 100gms of the chocolate chips and 75gms of the chopped pistachios, and fold both into the mixture.

Spoon half of the mixture on top of the panettone layer in the cake tin. Put another third of the panettone slices over the cream filling, again making sure there are no gaps. Sprinkle with another 2 tablespoons of liqueur.

Spoon the other half of the cream mixture onto to the panettone. Top with the final layer of panettone, leaving no gaps and sprinkle over the last 2 tablespoons of liqueur.

Cover the cake tightly with clingfilm, pressing down on the top a little, and put in the fridge for at least overnight.

To serve, take the cake out of the fridge, unmould it and sit it on a flat plate or cake stand, then spread with the reserved mascarpone mixture. Definitely don’t try to lift the cake off the base, as the cake is too soft and moist to remove.

Scatter the top of the cake with the remaining chocolate chips and chopped pistachios and the pomegranate seeds. The cake will look a little rustic around the sides but this is part of its charm! 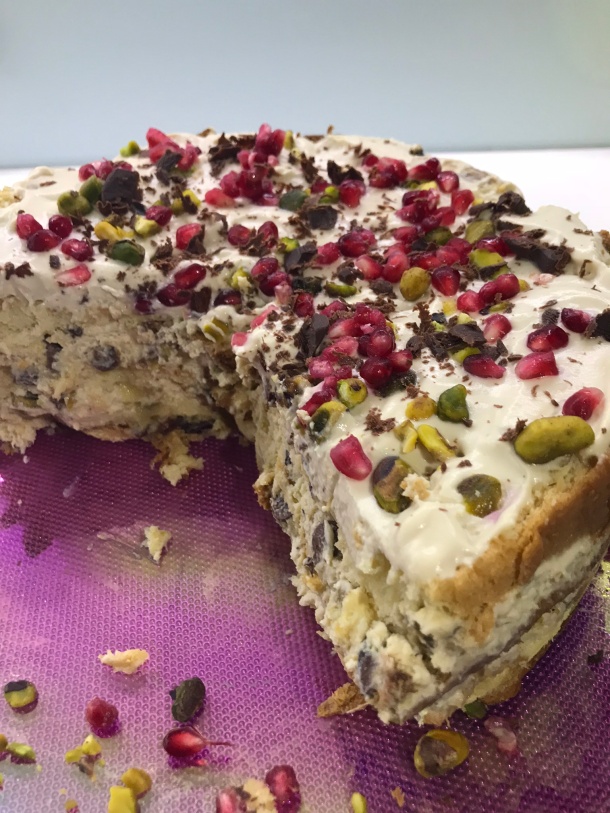