Berry Cheesecake Trifle was my in between Christmas and New year pudding for a family and friends lunchtime gathering. Technically it was still Christmas – the 29 December – if you do the Twelve Days of Christmas thing. The day was super hot – 38 degrees C! Luckily most of the fare was cold, and this cheesecake trifle, while quite filling, was refreshing with its large quantities of cool and fragrant berries.

The recipe is adapted from a recipe created by Queen Vanilla products and Dr Oetker products. I liked the idea of the cheesecake filling instead of custard and cream. The recipe also created some green chocolate bark, which I thought pretty festive too.

4 x 250g  punnets berries (strawberries, raspberries, blueberries, or any others you fancy). Frozen berries are fine too, I used a mixture of both.

A good slosh of an orange liqueur (Cointreau, Grand Marnier)

Combine all the berries in bowl, leaving a good handful for decorating the top of the trifle. You should cut the strawberries in halves unless they are tiny. Splosh on some orange liqueur, and add a little caster sugar to taste if the berries need sweetening. Leave for a few hours to allow the berries to release their juices.

Cut up the sponge into squares about 5 cms 0r 2 inches. It really doesn’t matter too much – they just need to be able to fit into your trifle bowl. You will also need to cut some odd shapes to fill in the gaps. Make a layer of sponge on the bottom of the bowl.  Add a decent layer of berries, making sure you spoon some of the liquid over the cake so that it turns red.

To make the cheesecake filling, beat cream cheese and butter with an electric mixer until smooth and creamy. Add icing sugar gradually, beating till the mixture is well combined. Add the vanilla bean paste. Whip the cream in separate bowl until just thickened, then fold into the cheesecake mixture.

Add layer of cheesecake mixture to the berries layer in the trifle bowl.

Repeat the layering –  sponge, berries and juices and cheesecake mixture, ending with a berry layer. The number of layers you get will depend on the size of your bowl and your generosity in layering. As you can see from the photo I got 3 layers of sponge and berries and 2 of cheesecake mixture.  You should leave enough of the cheesecake mixture to decorate the top (3 tablespoons or so should do it). Refrigerate until ready to finish the decorations and serve.

To make green chocolate bark, heat the white chocolate in small pieces in a microwave safe bowl on medium power in 30 second intervals, stirring in between each interval, until the chocolate is completely melted. Add the green food colouring and chopped Oreos. Spread the mixture onto a baking tray lined with baking paper.  Refrigerate until set.

To finish the trifle, pile the remaining cheesecake mixture on the top of the trifle. Scatter the left over berries on the top of the “snowy” mixture. I used only fresh raspberries for the top, as they looked the most elegant.  Break up the green chocolate bark and place as artistically – or in my case rustically – as you please. You don’t need to use all the bark – the recipe makes quite a large quantity. On the other hand if there are small children around they will love the white (now green) chocolate and you could use the whole lot on the pudding! 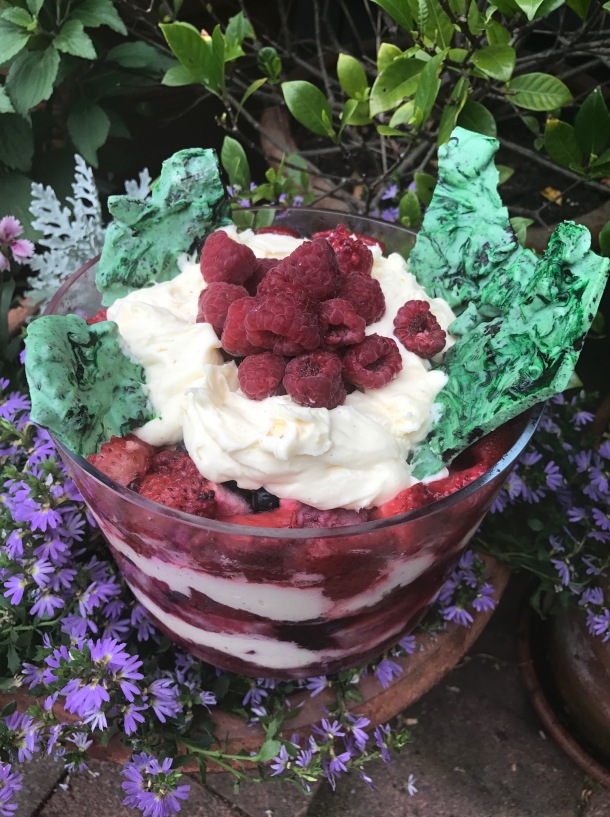