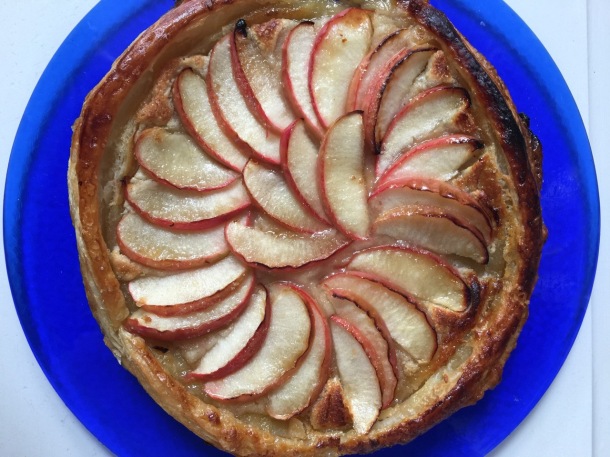 I have been wanting to experiment with puff pastry, and now on holidays, I have the time and space to get some practice in. Hence this apple and almond tart. This tart is made with rough puff pastry. It’s still a little fiddly to make, but not quite as time-consuming as real puff pastry.

However, unless you’re in the mood for some rolling and folding, you can just as well use good butter puff pastry, ready rolled, from the supermarket.  There are plenty of good recipes for puff and rough puff pastry if you want to go down this route. James Morton in How Baking Works and Paul Hollywood in How to Bake both take you through the process. And with all the diagrams too! So I’m assuming you will use the good store-bought stuff, or follow the directions of one the afore-mentioned Baking Aficionados!

I put an almond sugar filling in the tart before arranging some red apples in slices, with skin, on the tart. The almond mixture is not quite a frangipane as it has no butter. But you still end up with a rich almond paste on which to rest the apples.

Juice of a lemon

1 quantity puff or rough puff pastry (enough to make a tart base about the size of a dinner plate  – maybe 26 cm?)

Raw or ordinary caster sugar to scatter over the tart.

Preheat the oven to 200 degrees C.

To make the almond filling combine the ground almonds and sugars in the bowl of food processor. Add the almond extract and enough of the beaten egg to make a paste. The paste should be just firm enough to spread/ease into your pastry base.

Core and slice the apples thinly, and place the slices into the lemon juice to stop them going brown.

Roll out your chilled pastry, and cut a large circle, using a dinner plate as a guide. Place the circle on baking paper on a baking tray. Score the circle with another circle, 2cm inside the outer edge. This will give your tart an edge. Prick all over with a fork.

Place the almond mixture on to the pastry, leaving the outer 2cm circle free. Don’t worry if it doesn’t quite cover the pastry, just do your best. rough is OK. Drain the apples slices and place in any artistic way you like on the tart.

Brush the 2cm edge of the tart with the rest of the beaten egg.  Scatter the caster sugar over the tart, apples and the edge, but making sure the apples get a good covering. Place the tart in the oven and bake for about 20 minutes. The tart should be golden brown, and puffy round the edge.

Serve warm or cool with plenty of thick cream! 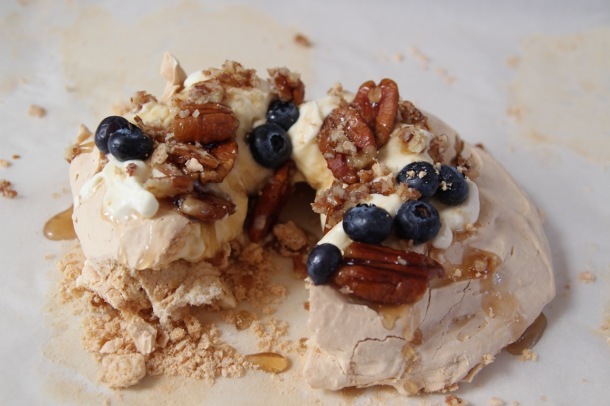 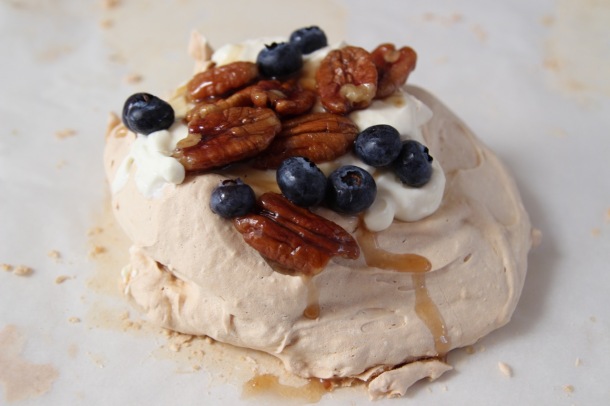 I had lunch recently at Bills in Darlinghurst, the original restaurant created by Bill Granger, now one of several restaurants world wide showcasing Bill’s simple and iconic style. I’m a huge meringue and pavlova fan, as this blog attests, so I had to order the brown sugar pavlova. It was amazing, crisp on the outside, gooey on the inside, with a lovely caramel flavour of brown sugar.
It was really made for sharing, but this greedy diner ate it all by herself! And I didn’t share it with my Quirky Colleague, which was probably a bit mean, as the pavlova was so delicious.
So I decided to recreate it, with a few of my own tweaks on Bill’s original recipe, including changing the quantities. My version has raw caster sugar for an added caramel hit, and I served it with maple butter pecans. I mixed light sour cream with thick cream for a tang, to offset the sweetness of the meringue.

A handful of blueberries

Beat the egg whites with the cream of tartar and vanilla until stiff peaks form. Add the raw caster sugar and brown sugar, 1 tablespoon at a time, beating until all the sugar is incorporated and dissolved and the mixture is thick and glossy. Stir in the cornflour and vinegar.

Pile the mixture onto the circles on the baking paper and spread into shape with a spatula. Place the baking tray in the oven and reduce the temperature immediately to 130 degrees C. Bake for 1 hour 20 minutes, then turn off the oven, prop the door ajar and leave the pavlovas until completely cooled. 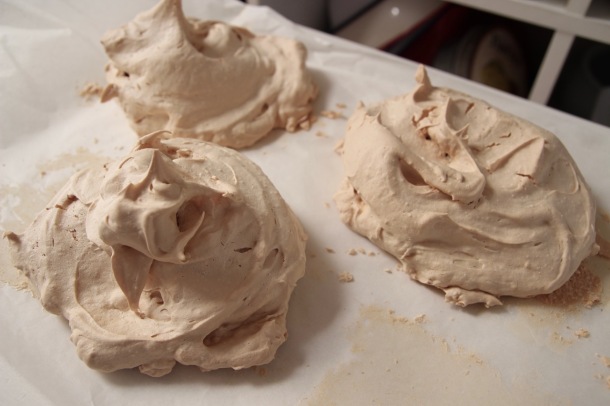 Combine the thick cream and the light sour cream in a bowl.  Melt the butter in a small frying pan and add the pecans. Toss in the melted butter, then add the maple syrup. Fry until the pecans are coated in the maple butter, but be careful not to turn the maple butter to toffee!

Spoon the cream mixture onto the mini pavlovas, scatter the maple pecans and blueberries over the pavlovas and drizzle with the remaining maple butter. Serve straight away. You can also freeze the unfilled pavlovas for filling at a later date. 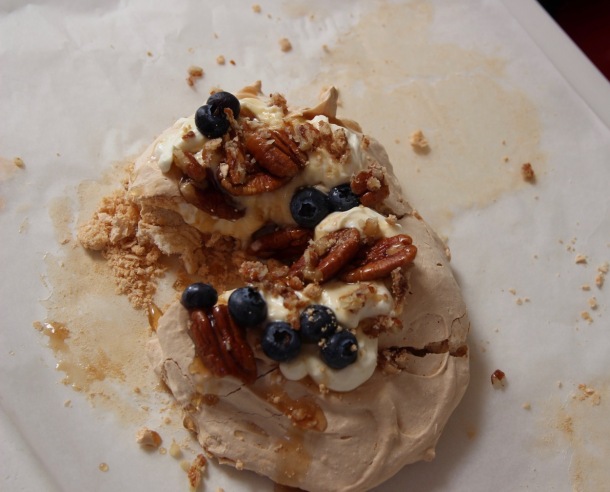 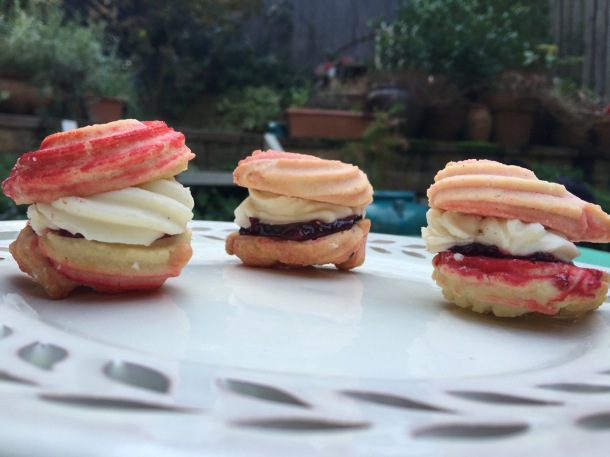 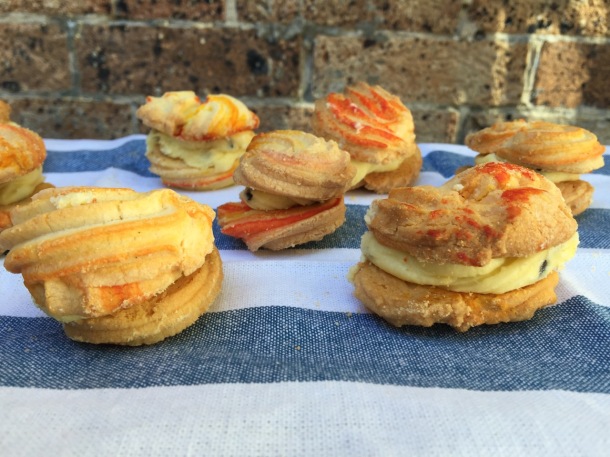 I made a couple of batches recently. I was experimenting with the technique of striping colour into the biscuit, by painting food colour into the piping bag before filling it with cookie mixture, an idea inspired by an episode of The Great British Bakeoff.

The technique for both is the same: simply paint a stripe using a pastry brush down the side of the piping bag, add your mixture, and pipe. I used a small star shaped nozzle.

Preheat the oven to 140 degrees C. For each batch, line 2 baking trays with baking paper. Put the butter, icing sugar and vanilla in the bowl of an electric mixer and beat until well creamed. Add flour and cornflour and mix until the flours are incorporated. Alternatively, you could use a food processor. I have used both – purists would say the electric mixture creams butter and sugar better.

Place the dough into the piping bag prepared with your colour. Pipe small shapes onto the baking sheets, allowing room for spreading.  Place in the oven and bake for 25-30 minutes, or until the biscuits are a light golden colour and slightly firm, swapping trays half way through the baking. Remove from the oven, and after 10 minutes, put the biscuits onto a wire rack to cool.

To make the buttercream icing, cream the butter and icing sugar in an electric mixer or food processor until light and fluffy. Add a dash of vanilla extract for the raspberry melting moments. Add the strained pasionfruit juice for the passionfruit melting moments.

Both are quite delicious! 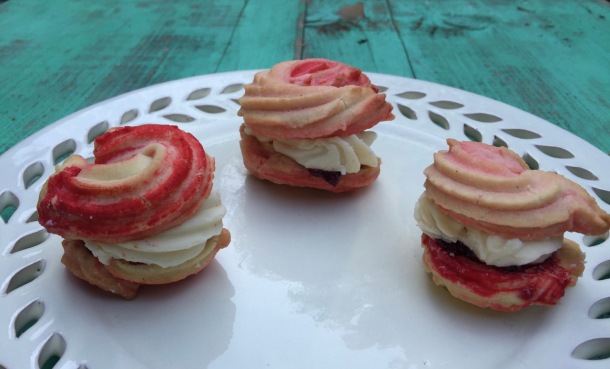 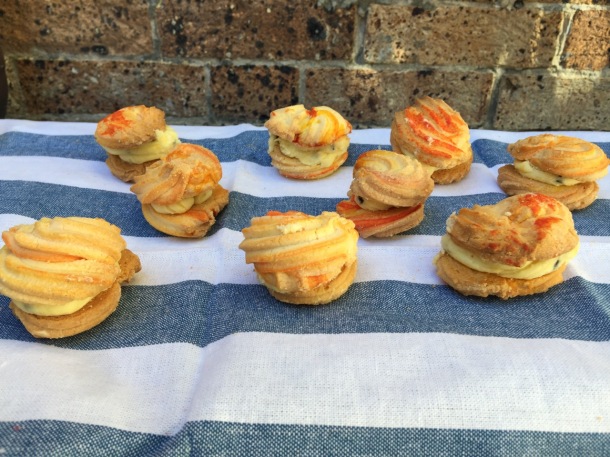