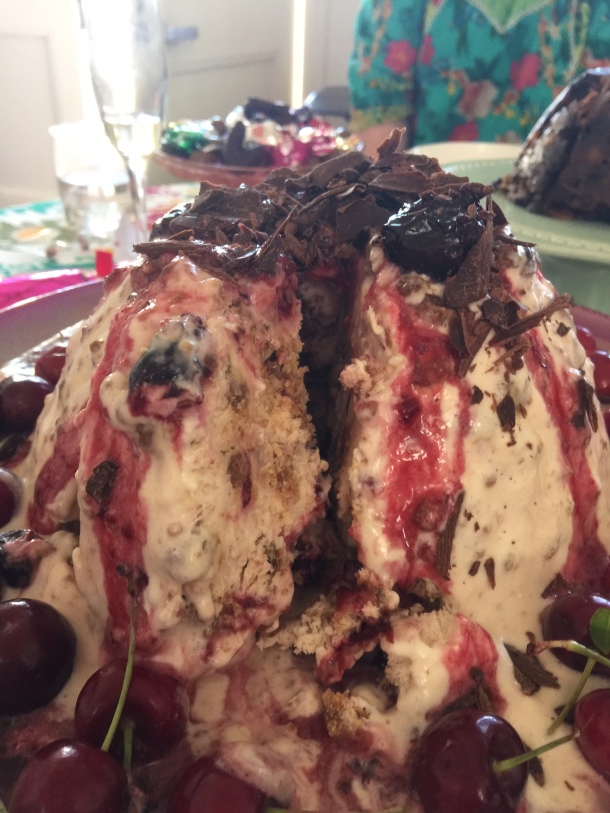 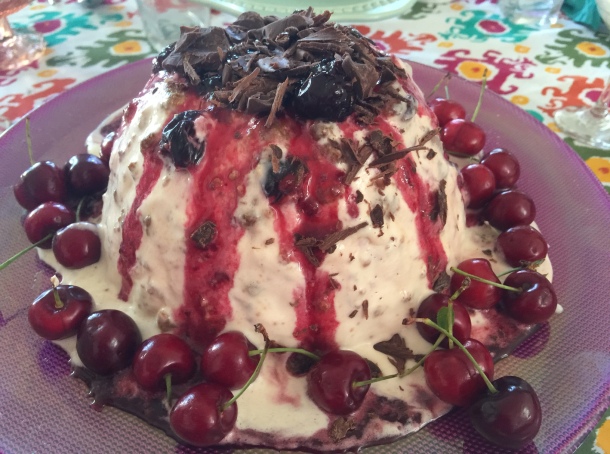 I found this recipe just before Christmas and it seemed the perfect solution to finding a new yummy dessert for Christmas lunch. I already had a sensational Christmas pudding – more of that in another post – and I was looking for something cold and sweet and a bit different.

Jamie has combined three great ideas – cherries because they’re seasonal for us in Australia, cheesecake which is always a winner and semifreddo for all us ice cream lovers!

It’s an easy recipe but you need to be prepared for a quite a few steps. It took me an hour or so on Christmas Eve, then freezing time overnight. It was ready to go for lunch on Christmas Day. I made these changes to the original recipe:

Method
Preheat the oven to 180 degrees C. Blitz the biscuits in a food processor until fine. Melt the butter in a small pan over a low heat and stir in the blitzed biscuits and a good pinch of sea salt.
Empty the mixture into a small baking dish (roughly 15 x 20 cm), pat down and bake in the oven for 10 to 15 minutes until golden and firm. Leave to cool.
Meanwhile, halve and de-stone the cherries and place in a small pan with 200g of the caster sugar. (Or use frozen cherries). Finely grate in the lemon zest and squeeze in the juice of half and place over a medium-low heat.
Gently bring to the boil, then reduce the heat to low and simmer for 6-8 minutes, or until softened and syrupy. Leave to cool completely, then blitz two-thirds of the mixture into a purée in a blender.
When you are ready to assemble the semifreddo, separate the eggs into two large mixing bowls and pour the double cream into a third bowl. Whisk the cream to soft peaks and beat in the cream cheese.
Whisk the egg yolks with the remaining caster sugar until creamy and pale and doubled in volume.
Whisk the egg whites with a pinch of sea salt until stiff peaks form.
Gently fold the whites into the yolks, using a large metal spoon to keep the mixture as light as possible.
Beat a large spoonful of the egg mixture into the cream cheese mixture to loosen it, then carefully fold through the remaining.
Marble in half the puréed cherries and crumble in most of the biscuit mixture in large and small pieces, then fold through most of the whole cooked cherries. Spoon the semifreddo into a 1.5 litre ceramic bowl, then crumble over the remaining biscuit and ripple through most of the remaining purée. Put the dish into the freezer for at least 6 hours.
When you are ready to serve, dip the bowl 2/3 of the way into a large bowl or pan of just-boiled water, being careful not to submerge completely. Hold until you start to see the semifreddo loosen from the sides of the bowl. Place an upside down cake stand or plate on top of the bowl, and quickly turn over, holding one hand on the bowl and one hand on the cake stand.
The semifreddo should come out in a beautiful dome. Serve garnished with the remaining puree, cooked cherries, shavings of dark chocolate and a handful of fresh cherries or mixed berries. 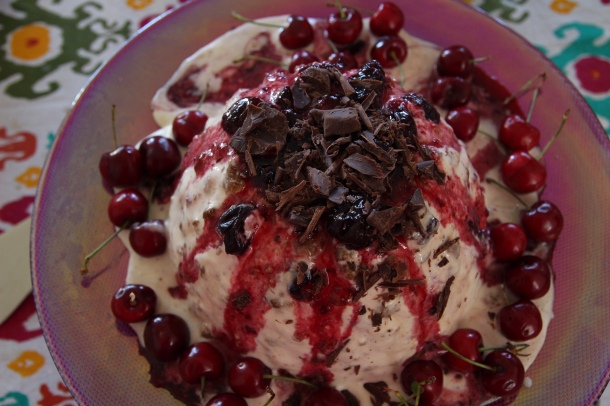