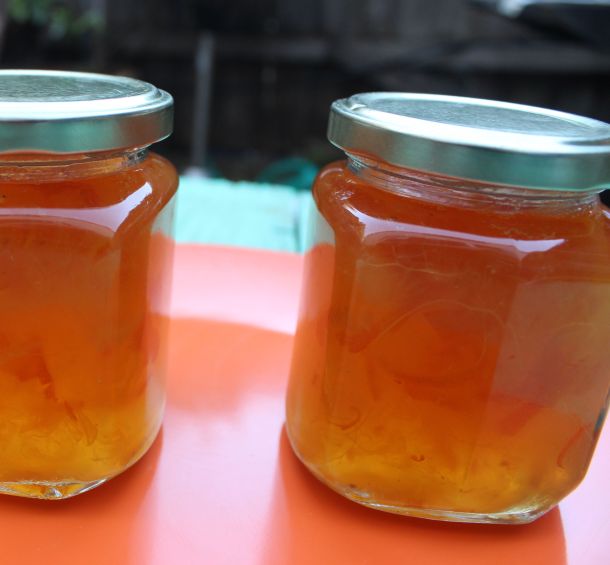 This is the last of the winter jam making. The season for Seville orange is almost over in September so when I was able to buy a few from my local greengrocer, I grabbed them.

Seville orange marmalade has a great set as the fruit is so full of pectin. However reaching setting point is tricky – undercook the mixture and you risk the set, overcook and the flavour caramelises. Careful timing and testing for set using the saucer in the freezer approach and you will achieve that lovely, bitter sweet jellied marmalade that is so much nicer than the bought variety!

Method
Wash the oranges in hot water, then remove the peel with a vegetable peeler or a very sharp knife being careful not to cut the pith away as well. Cut the skin into thin slices, and put into a large saucepan.

Add the water.  Bring to the boil and simmer for 1 -2 hours until the orange peel is tender.
The cooking time will be affected by how thickly you have cut the peel. To see if the peel is ready, pick out a thicker piece and press it between your thumb and finger. It should look slightly see-through and feel soft when you rub it.

Carefully remove the muslin bag, allow to cool slightly, then squeeze out as much liquid as possible to extract the pectin from the fruit pulp. Discard the bag.
Add the sugar to the pan, then put over a low heat. Warm gently so that the sugar dissolves completely, stirring occasionally. Do not boil before the sugar is dissolved.
Increase the heat and bring up to the boil but do not stir while the marmalade is boiling.

After 8-10 minutes boiling, test for setting point. Times will vary according to the size of the pan – in a large saucepan this takes 7-8 minutes, in other saucepans it may take 12-15 minutes. As setting point can be easily missed it’s better to test too early than too late.

I found that there was too much liquid in the finished product but I hesitate to specify less water until I’ve done some more testing.

I have specified less sugar than many recipes suggest as I want the marmalade to be not too sweet. You may like to increase the quantity slightly.