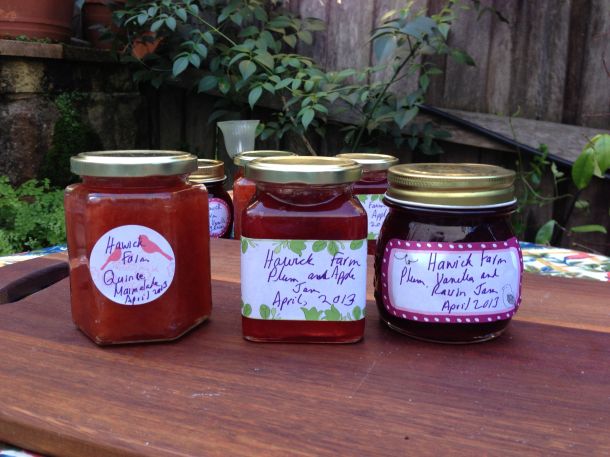 I love making jams and marmalade at any time of the year. April in Sydney is that in-between season, when you’ve made all your berry jams and before the start of marmalade making.
I found some late season, beautiful little plums at the Orange Grove markets. Also some organic pink lady apples, and some quinces, which inspired me to make some autumn jams.
So I came up with Plum and Apple Jam, Plum Raisin and Vanilla Jam and Quince Marmalade. I have adapted some recipes from the wonderful book Jams, Jellies and Marmalades by Margaret O’Sullivan, which has been my jam-making bible for many years.

Method
Halve the plums and remove the stones. Peel and core the apples and chop.
Put the fruit into the preserving pan (large saucepan) with the water and salt.
Bring to the boil and simmer for 15 minutes OR until soft. (The plums will disintegrate quite quickly).
Add the lemon juice, then slowly add the sugar, stirring to dissolve.
Boil rapidly until setting point is reached, approximately 20 minutes.
Test for a set by placing a little jam on a saucer in the freezer for five minutes. The surface should be set and wrinkle when pushed with a finger. If the jam is not set, return the pan to the heat and cook for a further few minutes until setting point is reached.
When setting point is reached, skim, and pour into sterilized jars.

Method
Chop the plums and remove the stones. Measure the fruit and add sugar equal to 3/4 of the amount.
Put into a preserving pan and cook slowly for about 20-30 minutes, stirring frequently, until setting point is reached (see Method for Plum and Apple Jam).
Stir in the lemon juice and raisins. Pour into sterilized jars, and then carefully place a section of vanilla bean (opened to release the seeds) into each jar of jam.

Quince Marmalade
Ingredients
2-3 quinces (whatever you can fit in your preserving pan).
Water
Sugar

Method
Put the quinces into a preserving pan with enough boiling water to cover and parboil so that the skin will come off easily.
Peel, core and chop the quinces, then weigh them.
Return the quinces to the preserving pan with the water used to parboil. Remove any excess water (the water should just cover the quinces).
Bring to the boil and simmer for 20 minutes. Add sugar equaling 1/2 the weight of the quinces.
Simmer for 1 hour, stirring occasionally. When the quince mixture starts to turn red, mash with a potato masher, getting rid of any big lumps.
Spoon into sterilized jars. 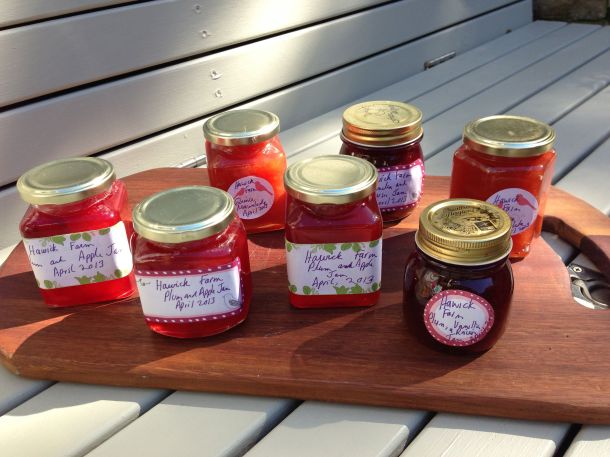